09 Jan 2017 Design and conflict transformation II: The future of management

What is the future of management in a rapidly changing world? What are the inherent tension points in contemporary models of leadership and organization? Where can we look for new models and what can they teach us about crafting new relationships between the individual and the collective?

During this fall semester at the New School, I´ve had the privilege of attending a number of meetings with the management department at The New School in the role of Research Assistant/Graphic Facilitator. The purpose of the meetings to establish and identify connection points, gaps and opportunities between the various management programs, as well as investigating possible directions for the future of management education.

The contextual landscape forming the backdrop for these discussions is a rapidly changing world – requiring elastic management attuned to uncertainty, complexity and contextualization of ones work in a larger socio cultural landscape – but also a growing bottom-up desire in in-coming students to rethink the old models of organization, ethics and what leadership looks like. “We need to take the “man” out of management” as one faculty member put it, referring to the one-dimensional idea of leadership as “a white guy in a shirt” or a heroic personality like Nelson Mandela, resulting in many capable people withdrawing from taking charge in practicing new forms of management and leadership. During one of the discussions we had during a futuring exercise, we identified a tension point in this ever-evolving landscape, that I believe to be a crucial leverage point for change in a variety of dysfunctional systems, whether political, social or economical.

The tension point came up while discussing how to progress from a culture of competition, hierarchies, focus on the individual and the tragedy of the commons, towards a culture of win-win, mutual benefits, and realizing the potential of groups for groups. One member of my futuring group raised the question; so does this mean the end of individual accomplishment?

At the heart of this discussion, I believe is the culturally, politically and psychologically ingrained idea of the opposition between the individual and the collective, according to an either-or logic, where one necessarily must dominate on expense of the other. Raised in social-democratic Sweden, and with my first five years of trembling adult life spent on US soil, I´ve seen the downsides of both an over-emphasis on the collective, and on the individual. The first easily resulting in suffocating sameness and an inability to understand and respect the individuality of anyone slightly “outside of the norm”. The second one oscillating between a praise of the “unique hero” individual responsible for its own success and accomplishments, and a ruthless blaming of that same idea of the individual for behavior rooted in serious systemic issues and structures.

The futuring discussion landed in the idea of one possible purpose of management education to engage a creative and dynamic discussion of how to manage the tension between individual and group accomplishment – recognizing the individual as part of a larger system. How can this tension be held and the potential of individuals be unleashed in a system for the collective good?

One fundamental aspect I see as crucial for this discussion is the role of the leader. As mentioned earlier in this post, the dominant idea of who a leader is and what they are like, is paired with masculine ideas of being in perfect control, knowing all the answers from the get-go, and exercising a hierarchical leadership without regards to the well-being of the larger system. When crafting alternatives to this, I believe the “new models” need to be plural rather than singular, explorative rather than set and rigid, and function as a way of increasing the kind of leadership models a variety of people can be inspired by and recognize themselves in, rather than trying to “mold” people into something that is not natural to them. So where do we start to look for these new models?

One arena for exploration are the various leadership models exercised in the culture of open source software – a culture based on voluntary contributions by a large number of individuals towards a common purpose or product. Reading about this culture in “The success of open source” by Steven Weber, one leadership model that stood out to me was the one embodied by founder of the operating system Linux: Linus Torvalds. Linus accomplishment is engaging and coordinating the creation of “a hugely complex and sophisticated operating system (..) built out of the voluntary contributions of thousands of developers spread around the world” (55). In the hierarchy of the organization of the work, “each person is free to choose what he wishes to work on or to contribute” with no “consciously organized or enforced division of labour” (62). This way, the “end to end architecture takes away the central decision maker in the sense that no one is telling anyone else what to do or what not to do (…) Innovation is incentivized and emerges at the edges, it enters the network independently and it gets incorporated into more complex systems when and if it improves the performance of the whole” (233). A select number of coders – earning their position through their work ethic and role in the community rather than through top-down appointments – function as gate keepers and maintainers responsible for a particular part of the code base, and eventually Linus makes the final decision for all official code modifications.

In the reading, we can identify a few key components to Linus leadership model. One being his mix of charisma and self-depreciation: “Torvalds is a shy person whose self effacing manner seems authentic, not manufactured for effect” (90). When explaining his standing on “keeping control”, he says “I won´t. The only control I´ve effectively been keeping on Linux is that I know it better than anyone else” (90). We further learn that Linus “goes to great lengths to document, explain, and justify his decisions about controversial matters, as well as admit when he believes he has made a mistake or changed his mind” (90). The culture fostered is one of direct confrontation, where “the principal norm is to say what you think and not be shy about disagreeing with what others, including Linus Torvalds” (63-64). Ultimately, Linus knows that “he could fail his followers in only one way – by being unresponsive to them” (90). 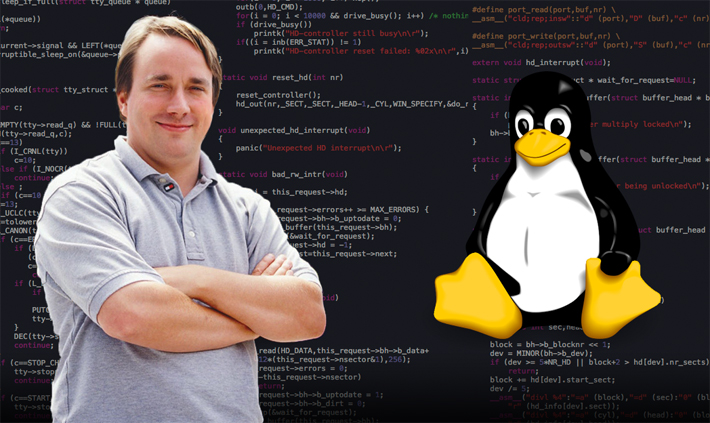 Another example of an interesting way of thinking about new leadership models is presented in a Ted talk by Itay Talgam, an Israeli conductor and business consultant. In the video posted below, Talgam carefully observes a variety of leadership styles embodied by different conductors, leading their orchestras through varying levels of dominant/subtle/gentle/forceful body language and gestures. He recognizes that the most successful ways of leading the orchestra is one of intense unity with the symphony –  where the conductor becomes an instrument of the process itself, with an acute sense for when to step back and allow for things to emerge, and when to exercise control and authority. I would call this an alignment with the system you are there to serve (the system being comprised of people/needs/potentials/contexts/material), a position I have experienced during participatory art projects as a place of deep humility. I would also describe it as an experience of a heightened sense of self simultaneous with a diminished sense of personal identity – a highly transformative space where the distinction between the “I” and the “collective” for brief moments are blurred in service of that which is born through all the elements involved in a collective creative process.

As different as the leadership styles embodied by Torvalds and what I would label “the aligned conductor” may seem, I see some shared characteristics. One being that they are both serving kinds of leaderships, focused not on using authority as a means of exercising power in one´s own self-interest (or the interest of a particular group), but as a tool to serve the overall system, creative process and each participant´s ability to contribute to this process. To deepen this discussion, I would like to invite in Donella Meadows and “Thinking in Systems”. In this reading, we learn that “in the process of creating new structures and increasing complexity; one thing that a self-organizing system often generates is hierarchy” (82), meaning an arrangement of systems and sub systems. “Hierarchies are brilliant systems inventions, not only because they give a system stability and resilience, but also because they reduce the amount of information that any part of the system needs to keep track of” (83). The purpose “always to help its originating subsystems do their jobs better” (84), reminiscent of Torvald´s approach to management.

Meadows also describes this relationship between systems and subsystems as one of a careful balance between chaos and order, calling for the types of elastic leadership qualities displayed by the “aligned conductor”. Too much chaos, and the sub system´s goal may start dominating the total systems goal, with a weakened system overall as the result. Too much control from the top, and the sub systems cannot perform their self-maintenance functions, potentially resulting in a collapse of the entire system. For a highly functional system to emerge, “hierarchy must balance the welfare, freedoms, and responsibilities of the sub systems and total system – there must be enough central control to achieve coordination toward the large system goal and enough autonomy to keep all subsystems flourishing, functioning and self-organizing” (85).

Finally, a couple of words about the potential role of Transdisciplinary Design in the search for new leadership and management models to better respond to and serve the changing conditions of our times. As exemplified through the topics of this blog post, the discussion of a plurality of new models and ways of seeing, would be best conducted through a cross-disciplinary discussion and mapping of insights, system behaviors and possible cross-pollination between different spheres. I can see this discussion inviting corporations, non-profits, grassroots organizations, leaders in public service, and practitioners from arts and culture, to deliver a sort of manifesto of best practice/s in response to a variety of circumstances. As mentioned in the “The success of open source”, “the interface between differently structured systems is typically a very creative place where new forms of order, organization and even life arise” (262).

0 comments on “Design and conflict transformation II: The future of management”