What happens when social roles connected to race and organizational cultures built on fear get in the way of sensible conflict transformation? What is what I would label “the great white war” and how does a conflict in a local community house connect with global constructions of racial identity?

As part of a management and organizational behavior class, we were asked to bring in and analyze a specific case study from an organizational setting. I chose to discuss an instance that occurred in my former home community in Tensta that in a way was the culmination of a long series of frustrating experiences at the intersection of the local community and the majority culture in charge of the resources in the area. I will share the story and the presentation I held below. 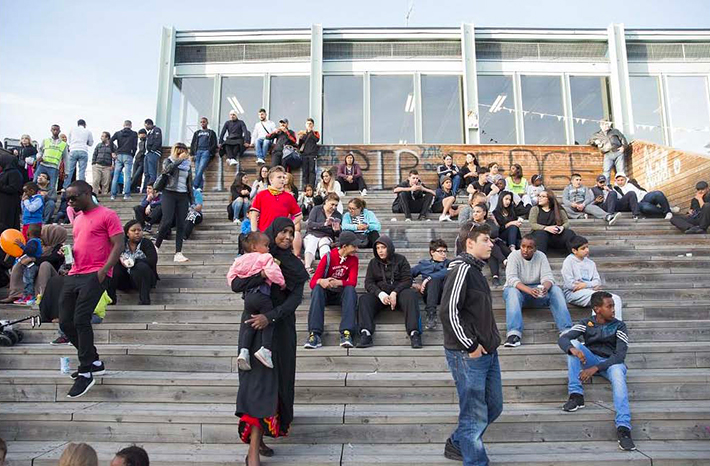 People involved in the conflict: Youth from the area (15-16 years old), a visiting artist and an actor from a theater group I was working with. I was not in the room at the time of the conflict. 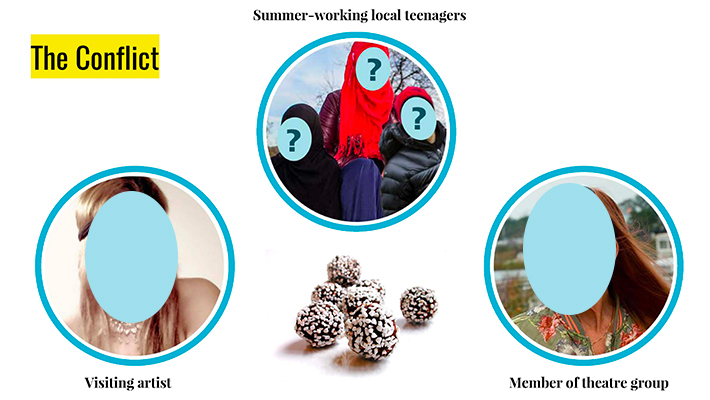 The conflict was triggered when the actor, a 65 year old woman of white identity, referred to the chocolate balls on the table in front of her as “negro balls”. This name was the official names of these balls when she grew up, a name that for obvious reasons is no longer acceptable, but that still occasionally slips through in the language of people of a certain generation. The use of this word stirred an intense conversation with the youth, who as far as I know all had African background, and the visiting artist, also white identified, who questioned the actor which led to a longer conversation about racial stereotypes, the use of certain words etc. As these are very sensitive topics, both for white and non-white people, the people present got emotionally involved. The actor in particular would stay and argue with the youth and their leader when they asked her to leave. She demonstrated very expressive body language, which I was informed later was perceived by the youth and the visiting artist as threats of violence. Everyone was shaken and affected by the incident, but when the actor returned to the rest of the group, neither of us realized how serious the encounter was or even that there were young people involved.

The following day, I was called in to have a conversation with the cultural coordinator, the head of youth culture (both leading figures in the house) and the visiting artist. Before I went there, I talked to the actor, who would tell me how attacked she had felt; misunderstood, judged, disrespected as an old person, in particular by the visiting artist. She assumed no responsibility for the outcome of the conversation, claimed to be innocently judged and referred to the visiting artist in demonizing terms. 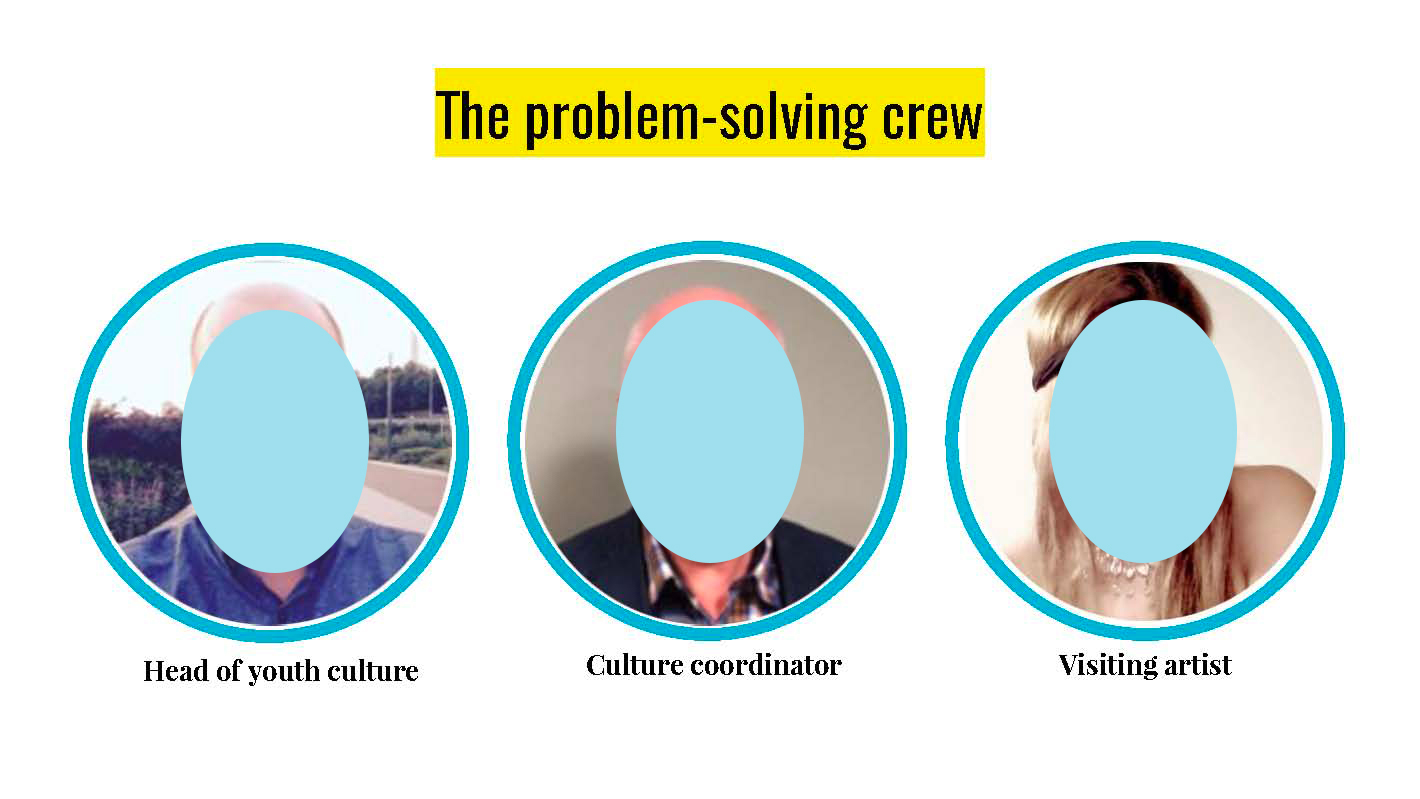 As I came to the office, “the other side” of this conflict exhibited the exact same behavior as expressed in body language and description of the incident. I was confronted with the image of a monster, no one questioning if the perceived intent of violence was real or not. I was informed that they had reported her to the police for hate crime. They further demanded that I support this police report as the appropriate thing to do, and join their side in the demonization of this woman.

With some experience of patterns of behavior exhibited by people in charge of resources in the area, I´ve grown wary of this behavior of fear and demonization, a behavior that more often than not hits young men from the area of immigrant background. I have on many occasions seen this fear result in a “tool box” for problem management that is very small, oscillating between overly disciplinary actions and a kind of overwhelmed laissez faire mentality.

I so chose to respond to the situation by clearly expressing the unacceptable in the behavior of the actor, but also said “I don’t have enough information about what happened. I´m not saying it was wrong to report her, but maybe this could have been handled in a different way”. No one in the room was interested in my perspective.

The day after, I was informed that the art leader arranged a “peace demonstration” in the area, going on the radio as the voice of these young people to talk about the hate crime and threats of violence that they had been subjected to. Text reading: “A moment for peace – this could have happened to anyone of us!”. “Bring your dear ones and we´ll together create an safe place for peace. Peace for you, me and us together! Refuse racism and stand up for peace! Peace is created together!”. An event that according to the facebook page, gained interest mostly from people of the same skin color as herself. 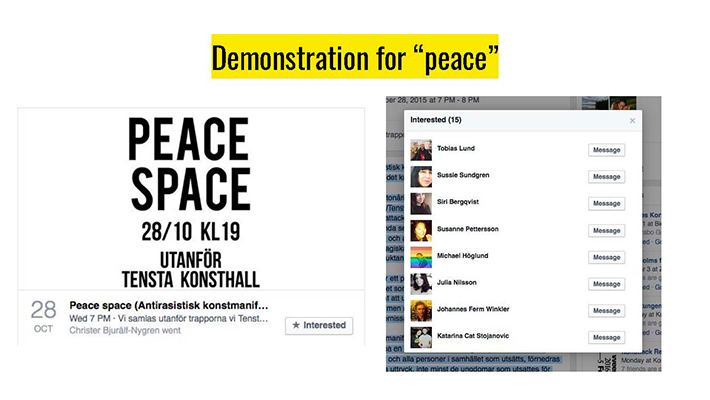 Shortly after, I was informed by the cultural coordinator that the city district has decided that the whole theater group was banned from the building because of my lack of loyalty with their perspective. “We don´t know where you stand”. I then took the opportunity to express my perspective to this person over the phone. I explained that I experienced the situation as very polarized, and that I found it irresponsible on behalf of the young people involved to escalate their fear of racial violence and spread it around in the community without properly trying to understand what actually happened. I also mentioned that I saw the escalation of things preventing any kind of meaningful dialogue that could occur around what had happened, possibly deepening social and racial divides that are already affecting young people in the area in very tangible ways.

He said I´m very wise and asked how I would you suggest we dealt with this situation. I then proposed that we arrange a meeting between me, two members of the theater group who are also young and from the area and the kids involved to hear their perspectives on things and hopefully calm things down a bit. He said that sounds great, I´ll set this up. 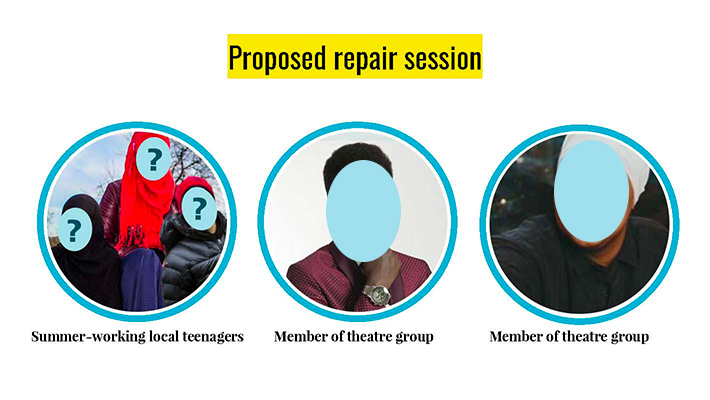 The days passed. When I reached out to the cultural coordinator after a few days, he said “Oh we´re just waiting for the e-mails of the youth from the visiting artist”. A few days later I talked to him again and this time he has completely switched and pretends like we never had the conversation we had before. He started throwing accusations at me (such as not standing on the side of the youth) and says that all levels of the city district have agreed that I´m a threat to security because of my lack of loyalty with their perspective. The main person in charge of the decision the person responsible for Development and Democracy within the district.

Over the next few weeks, I reached out to a couple of people I know in the city district. One of them responded three weeks later, not addressing my concerns about the escalation and polarization of the conflict, simply mentioning that this is standard procedure and that I should not take it personal, because “young people might have a hard time distinguishing between a group and a person”. The other person was more honest and said that if you by yourself try to challenge the city district, you will lose, build your coalitions elsewhere.

Analyzing the situation through some of the theories we studied in class, we can see clear parallels to common colonial patterns of people of a certain social group claiming an unquestioned right to solve the problems of others. 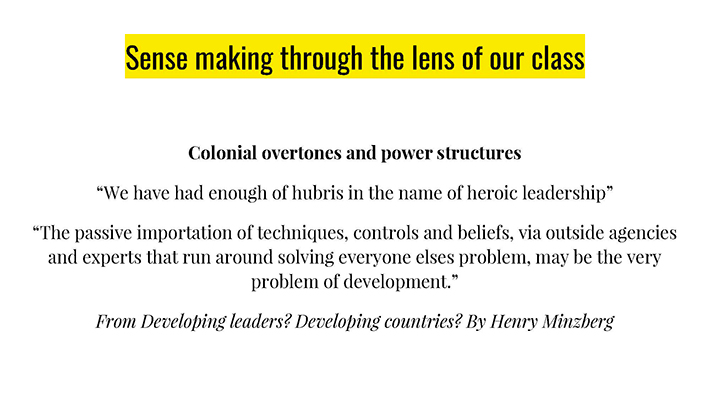 Hoffman´s theories of performed roles also come in handy, with the added clarification of the role of the “white savior” performed by the “problem solving crew”, really exhibiting two “Others”: the “evil white person” (as opposed to them, “the good white people”) as well as the “vulnerable non-white youth in need of protection”. Both, in my interpretation, tools to confirm their own self image, and roles that are exercised on a global level in ways that I will go more in-depth about in a future blog post. 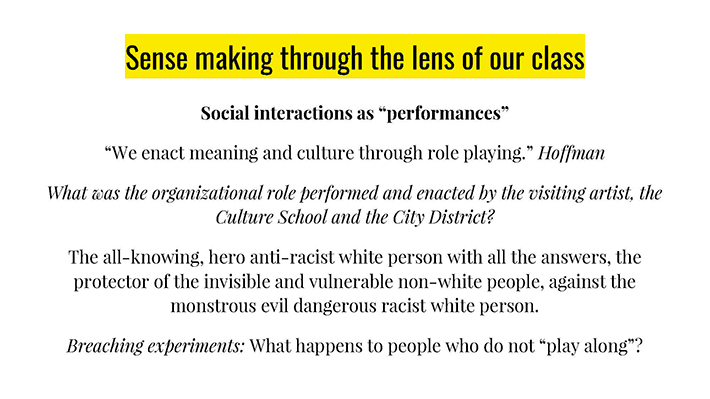 The final note below, about breaching experiments, talks of the consequences of not playing along with culturally assigned roles, and the clarity in terms of norms that are exhibited when someone breaks them. In this case, of me in a peaceful way not adhering to expected loyalties of the role of “a good white person”, unleashing some pretty hostile behavior in the people around.

Another theory that is useful, is the one below about the link between the basic assumptions and the expressed values, and the gap in-between. How we as humans so often put our focus on the expressed values, thinking that words like peace or compassion or democracy create realities by themselves. They don´t. This is where I see a designerly mindset comes in also, through an interest in the HOW, the manifestation of values in real structures, tools for conflict management or how to analyze a situation, specific processes of inquiry, an interest in consequences, effects, real needs, beyond ideological assumptions and distorted self-images. The change agent with a designerly mindset as someone at least striving for some kind of neutrality, the loyalty with the overall system, the most ideal outcome out of a given set of variables. It´s not an easy role to take on in a world where most sides of the equation demand your loyalty with their perspective, but indeed a necessary one. 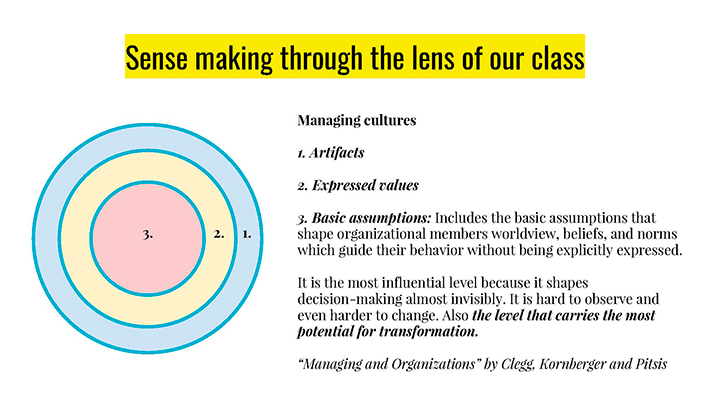 0 comments on “Case study: The great white war and a dysfunctional organizational culture”