How can one understand the media dramaturgy that played out in the aftermath of Donald Trump’s comments on Swedish immigration? What were the global alliances on each side, and what is the issue with responding to narratives of immigration connected to crime and devastation simply by referring to facts?

For a class in media and engagement, taught by John Bruce and Todd Chandler, we were asked to bring in current media examples related to our readings.  I selected the story of Trump spreading twitter comments about Sweden´s immigration policy leading the country into destruction by referring to a Fox News report about burnt cars, attacked reporters and stones thrown at police in my home community in Stockholm, comprised of a majority of people of immigrant background.

The response to this comment revealed global alliances and identities, or something I have referred to before as “the great white war” or the battle of who “we” are as white people. Participating in the war, on the one hand, the liberals, with the simplified vision that “diversity is great”, pushing a narrative of themselves as being “democratic, fair and cosmopolitan”. On the other side, the right-wing conservatives with the message “diversity is a disaster”, seeking constant proof for their belief that a multi ethnic society is doomed to fail.

So, let’s start with the strategies of the right-wing conservatives and the trans national xenophobic nationalist alliance between Sweden and the US.  Shortly after Trump’s comments, Swedish Democrats Jimmie Åkesson and Mattias Karlsson announced their support for Trump in a debate article in Wall Street Journal below. Their message: “Trump is right, Sweden´s embrace of refugees is not working”. The overall message (freely interpreted by me): “The establishment are hiding something from us, their facts are ideologically biased, we “know” immigration is a disaster and a threat to our (white) societies.” 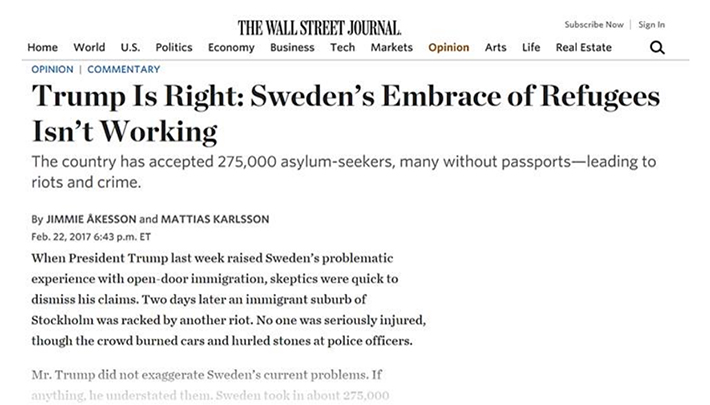 So looking at the other side, the trans national liberal alliance between  Sweden and US, we see a situation where public officials in Sweden and the “liberal establishment” in the US both ridicule Trump´s comments and present facts showing that an increase in crime and immigration are not connected. See example of a US debate article below, going from presenting facts that immigration in Sweden has not increased crime, to concluding that “immigration is great for Sweden” based on facts about the aging population. The overall message (interpreted by me): “Trump and the Swedish Democrats are not basing their assumptions on facts, we are, and they are clearly showing that immigration is good for Sweden and diversity is great”. 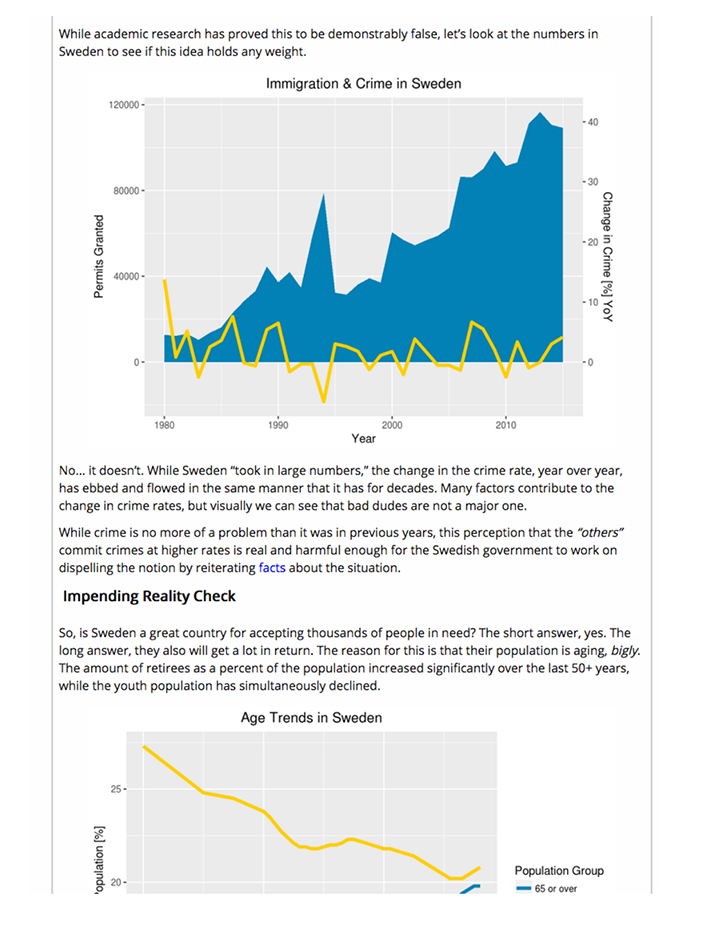 Both sides, in a way using facts to support their own ideological agendas and their own self-images  as the “rational diversity protectors” (the liberals) or the “truth speakers” (the right-wing conservatives). This is a pattern of behavior I have seen over the course of many years of social activism in the predominantly immigrant community where I’m from. Reading the established news from this angle was for many years an alienating and somewhat schizofrenic experience. The area would sometimes be painted in a victimizing language, sometimes described as a threat, oftentimes when referring to facts it would happen in a way to downplay experiences of discrimination, marginalization and alienation from Swedish society to support a majority self-image of the tolerant and humane foundation of Swedish society. “The facts look great” in many instances the majority media message until recently when violent shootings and gangs have indeed escalated over a very short period of time, directly tied to the communities that for a long time have cried out for recognition of its social struggles and unequal position within Swedish society. Or more than anything, being recognized as a part of Sweden in all its complexity, not simply a projection area of the fears, needs, desires and prejudice of the majority population.

The paradoxical role of facts in all of this? Tobias Hubinette, a scholar on race and discrimination, collects data showing levels of segregation, income and job inequalities based on “race” and ethnicity from a social justice perspective. This data – as far as I’ve understood it –is used and embraced by social justice groups, who use it as grounds for pushing a social justice agenda. The other group that at times embrace these facts are the Swedish Democrats, who use it to “prove” that integration is not working and immigration needs to stop.

My point: We indeed need nuanced facts. But facts themselves mean little without support by an ideology that holds. Otherwise, from the perspective of the liberal position, what happens when the facts change and they suddenly show a correlation between immigration and crime?

According to the lens of Conflictual Harmony, these kinds of identities and narratives are brought to the surface with the only purpose of re-writing them. Underneath the archetypes, the war positions, the single-minded perspectives of everyone pushing their own agenda, there are very real people, complexities, nuances, wisdom and seeds to build upon. More often than not, there are people questioning the established dramaturgy, scripts and roles from all angels, but in a media landscape that favors simple narratives and set positions, these agents rarely connect and grow into a true force of its own.

Only way forward, in my opinion, to establish truly inclusive platforms, dedicated to re-writing the script of our own participation in a hyped up and polarized media landscape. Carefully crafting new narratives around issues of immigration and national identity, from multiple angles, looking at facts to guide actions rather than ones ideological position. Out of this mess, craft a more grounded path out of the dominant hierarchies and power relationships, seeking that which is yet to come.