My Role: Initiator, Director, Designer. Responsible for mobilizing the network in close collaboration with Bem Joiner and Nicole Smith, as well as raising funds and coordinating and overseeing all activities during the festival. As Graphic Designer I was responsible for communication of the festival.

The cultural festival “Creative Call: ATL x STHLM” was arranged with the purpose of exploring the cultural and social links between the multi-ethnic Stockholm suburbs and the urban creative culture of Atlanta, influenced by a long tradition of African-American leadership and cultural influence.

Through selecting a number of Atlanta artists with roots in hiphop but all going beyond the confines of the traditional hiphop sphere (by for instance crossing boundaries between what would traditionally be considered “hiphop” and “fine arts”), the program activities were designed to stimulate creative expression among Stockholm youth, and explore new forms of community across cultural, age and disciplinary barriers.

A declared purpose was also to introduce the cultural sector in Stockholm to art practices with roots in the “periphery” of the cultural hegemony within the contemporary art sphere, to question the status quo in terms of cultural taste and hierarchies between different art forms – inspiring new ideas about how art is produced and expressed, and who it is for.

The festival came to be after extensive research on social identities and their relationship to the contemporary art and cultural sphere in Stockholm. The concept was initiated and developed after connecting with Creative Culture specialist and “Southern Renaissance Man” Bem Joiner in Atlanta, as well as curator Nicole Smith (with double Master´s Degrees in African diasporic and Feminist Art), living in Stockholm but with extensive experience from the Atlanta art scene.

The festival was supported by the American Embassy, Kulturrådet and Stockholms Stad.

For more information, visit an archived version of the Creative Call website here. A more comprehensive image gallery can be found here.

With artistic leadership from Förorten i Centrum and creative contributions by Dubelyoo and Sir Tom Foolery, ca 100 local citizens of all ages shared their visual stories at the wall in Blå Huset under the theme of “place and identity”. The workshops were held during four days, during which the Atlanta and Tensta communities met through food, music and painting. 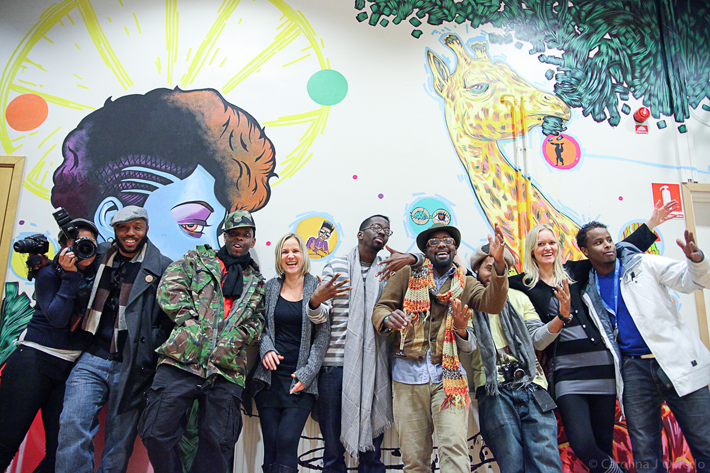 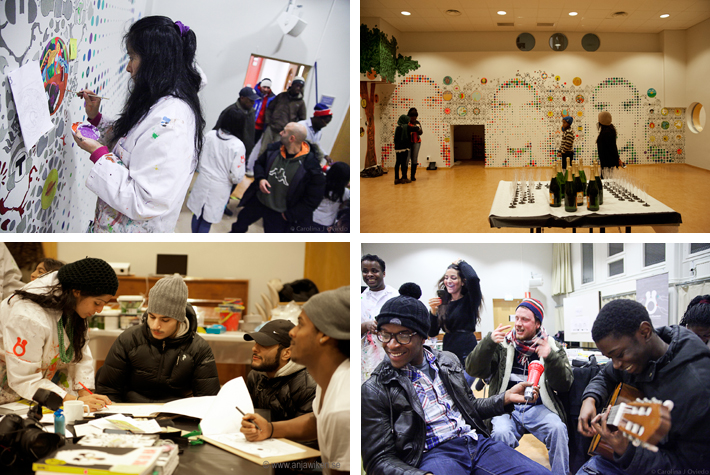 Local Capoeira group FICA – Capoeira Angola Tensta hosted a workshop with dancers from breakdancing crew Burn Unit. Capoeira shares historic roots with hip hop-culture. Just like in Capoeira, breakdancing uses common codes and through the flow of rhythm, rhymes and interaction between the dancers are each dancer´s athletic abilities put to the test in the middle of the ring, in an effort to impress with one´s own style of dancing. 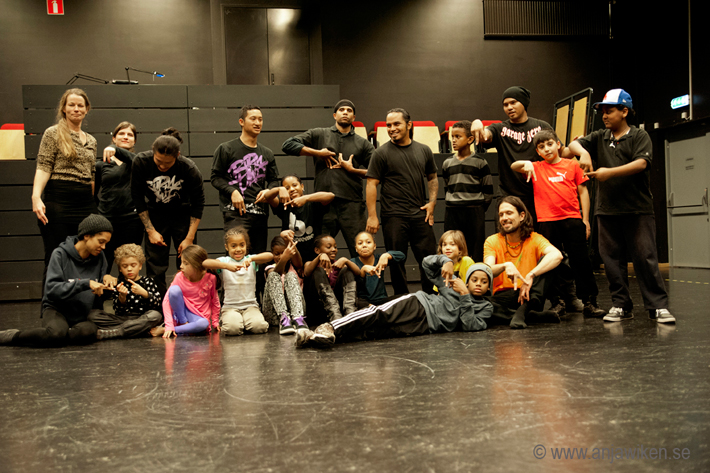 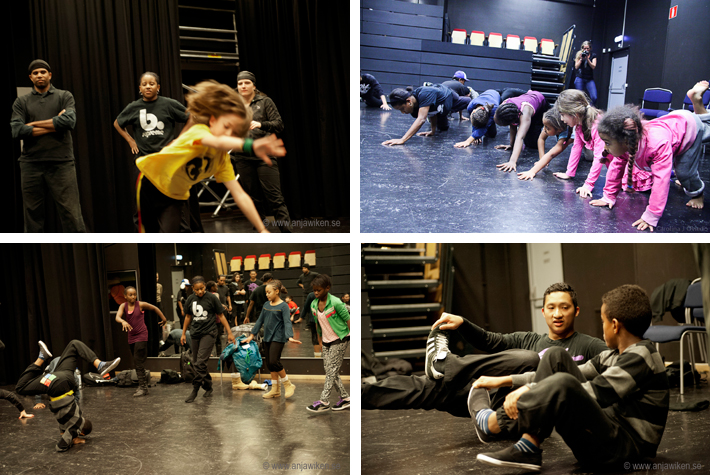 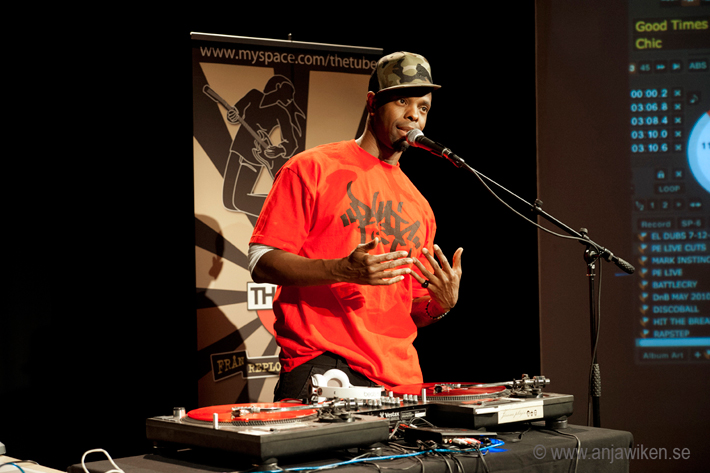 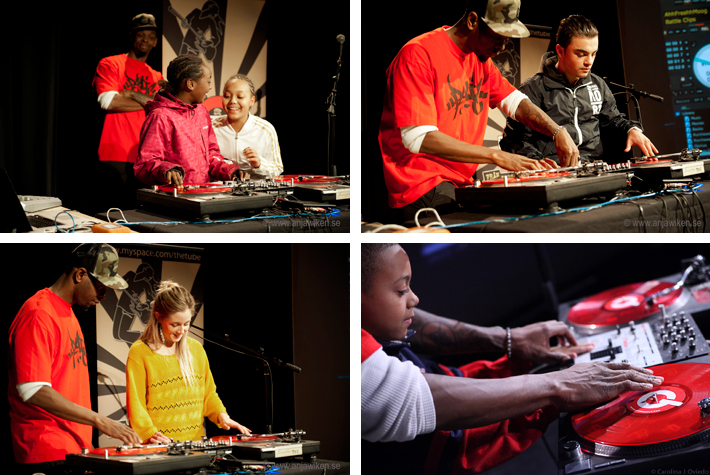 Hosted by Ayesha Quraishi Creative Call LIVE invited the audience to a night of performances. Participating Atlanta artists and youth shared the stage at Studion after spending a week together in Tensta workshops, discussions and collaborative art production. The evening included a dance performance directed by Burn Unit and FICA Capoeira Angola Tensta, projections of a mural created at Blå Huset, short video screenings by artist Fahamu Pecou, and live painting by  Dubelyoo and Sir Tom Foolery, plus DJ sets and an all out assault on the turntables by Public Enemy’s infamous DJ Lord. 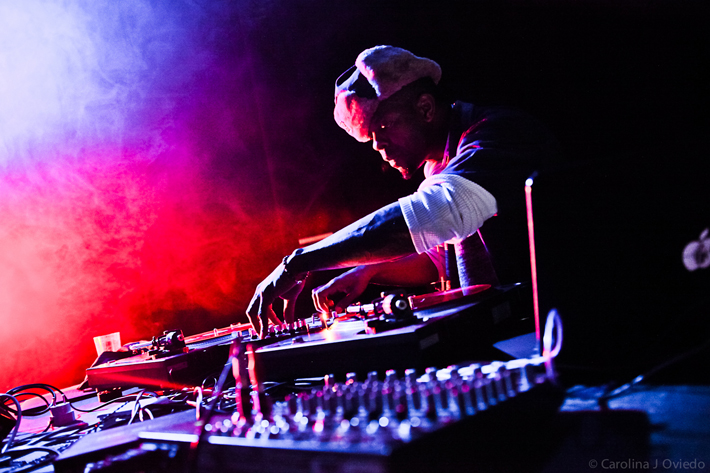 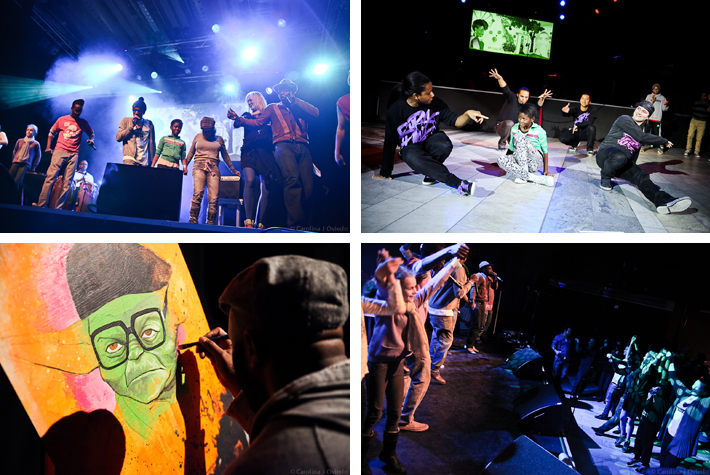 The 15 Project at Moderna Museet

Pop artist and culture critic Fahamu Pecou´s late-night-talk-show The 15 Project fuses the worlds of pop culture, fine arts, comedy and music entertainment. For this special Sweden edition of the show, Pecou hosted three guests to help him take the temperature on the Swedish art and cultural scene, also in relationship to a broader European context. The guests included artist, filmmaker and researcher Behzad Khosravi and Holland-based American curator Shantrelle P. Lewis. Leading up the the show at Moderna Museet, Pecou spent a week in Tensta where he filmed short video clips to be featured during the show. During this week, he also found his last special guest in a comedian with links to the community. 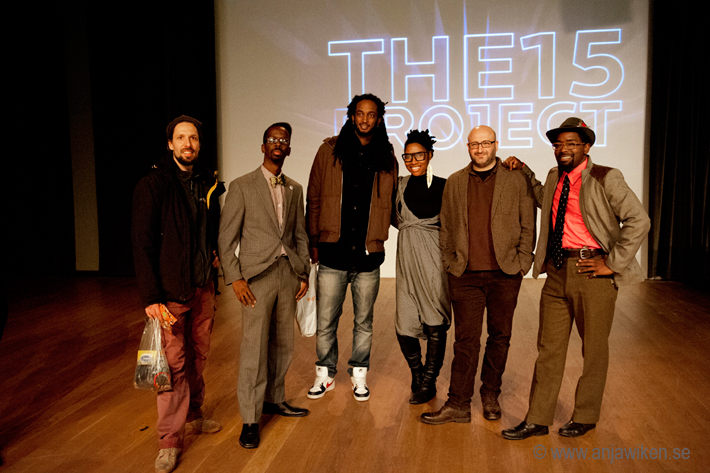 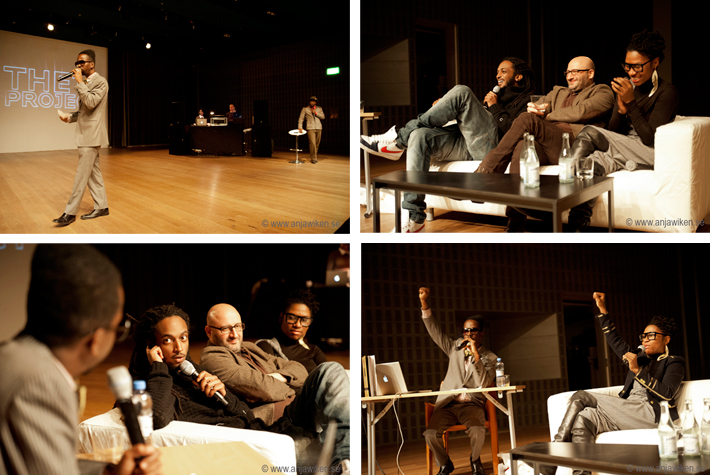 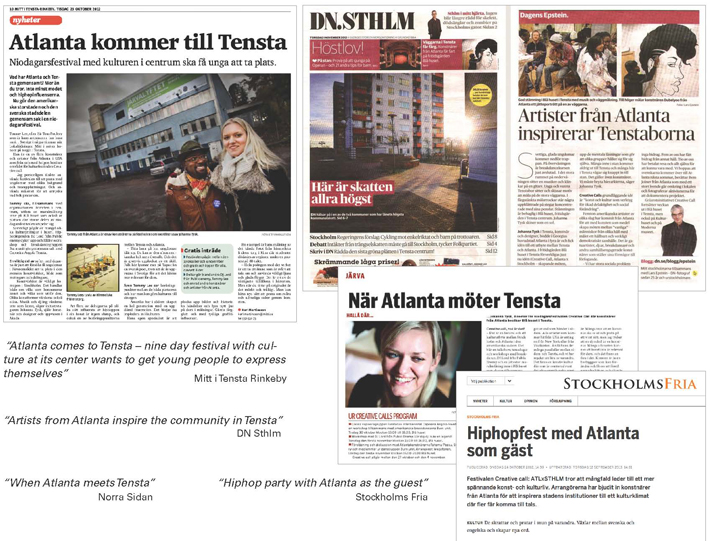 For the visual communication, I was influenced by hiphop-culture´s use of character design, “too-much-of-everything”- logotypes, graffiti splatter, badges and emphasis on strong visual symbols like wings and stripes. With hiphop-influence as the foundation, my aim with the graphic expression was to break out of hiphop´s stereotypical visual expressions of tough rappers and hard urban environments, by adding joyfully roaring and humorous characters, light and bright colours, graffiti splatter reminiscent of brush strokes on a canvas, and neutral typefaces. I also used symbols of various artistic expressions – the brushes, the vinyl-record, the dancers – to communicate the hiphop idea of the unity of all artistic expression. 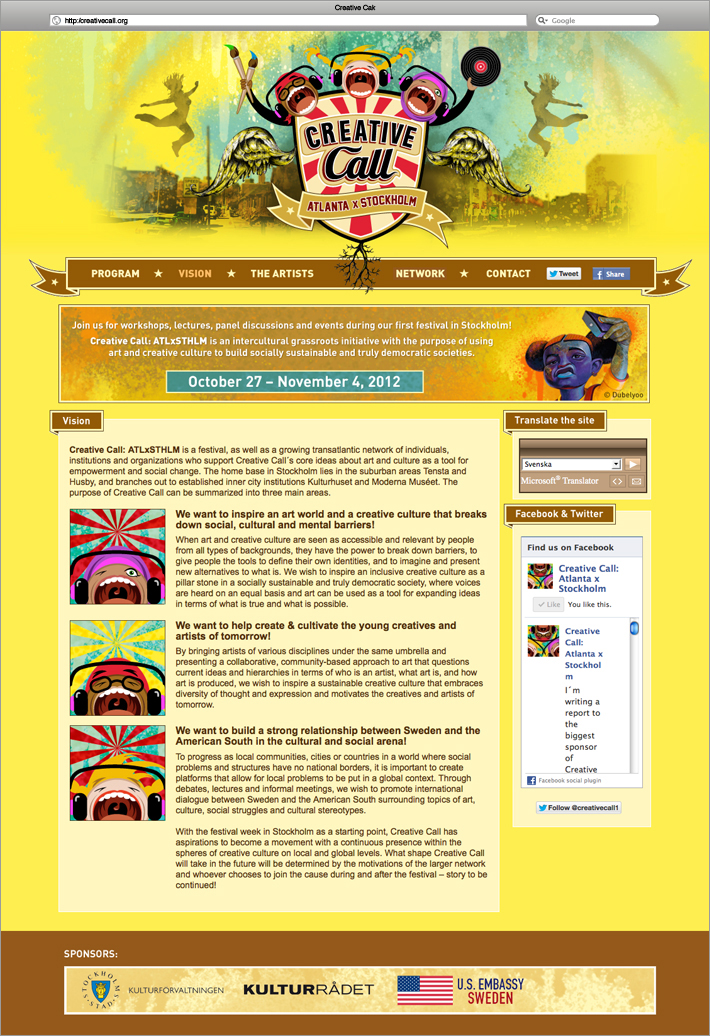 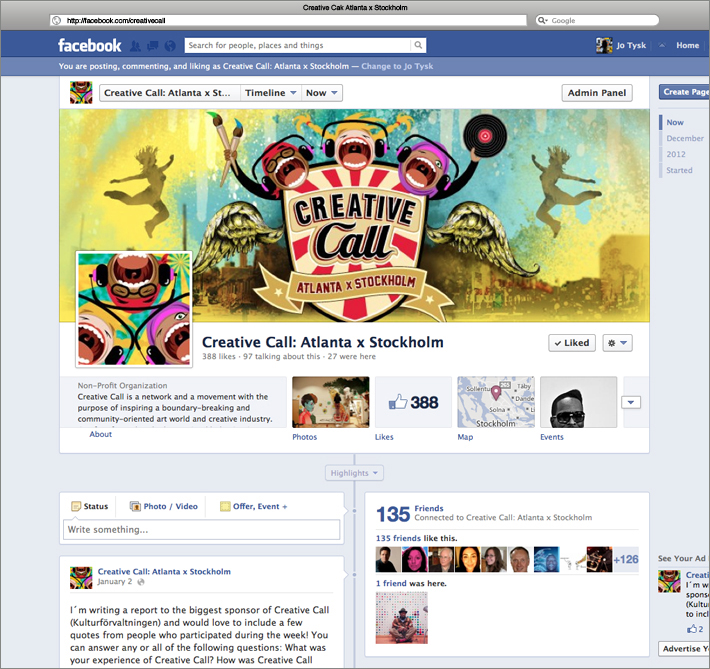 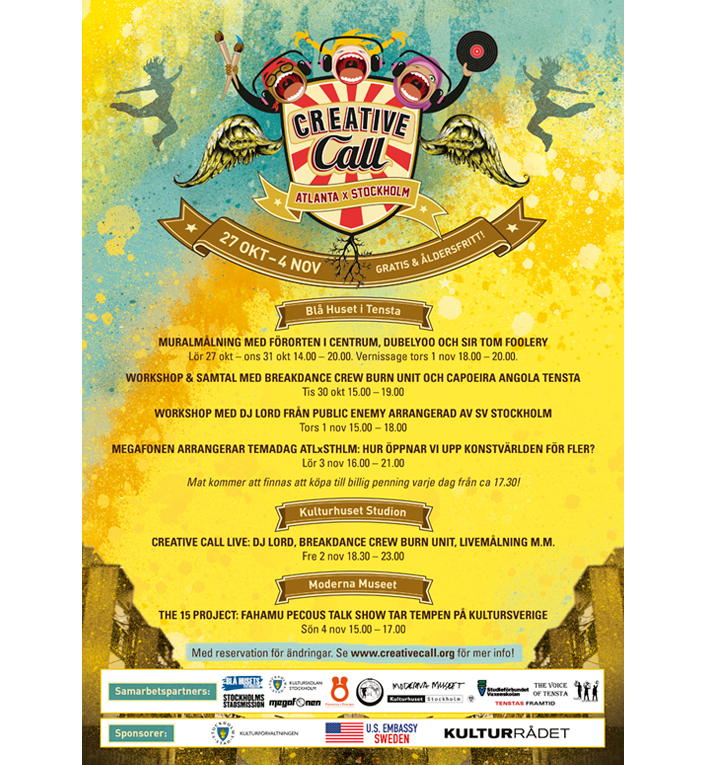 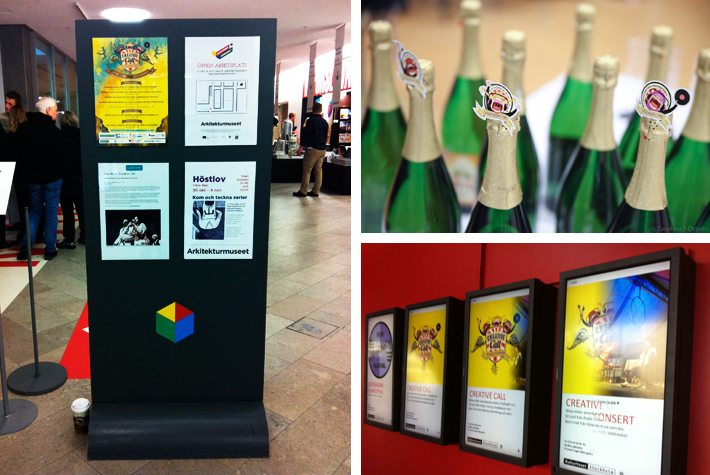