What? A network and a think tank based in the Stockholm suburb of Tensta, with the purpose of inspiring civic engagement and community empowerment, as well as new solutions to the challenges of integration in present day Sweden.

Love Tensta – launched as “Sweden´s first hope agency” – was founded in response to the “victimization” of the inhabitants of suburban area Tensta in the general mind set.

Tensta has a majority of people with non European immigrant background, high unemployment and a general image of being a “problem area” in terms of crime etc. It is the opposite pole of wealthy all-white areas in other parts of Stockholm, and is a result of a staggering ethnic and socioeconomic segregation that has very much come to define large parts of urban Sweden today.

Love Tensta was initiated upon my encounter with three socially engaged students/youth leaders from the area, in response to an image that thinks of Tensta as something “Other” than Sweden, something to “fix”, “resolve” or “take care of”, turning it into sort of a “3rd world colony” in Sweden instead of an integral part of Swedish society.

In sharp contrast to this image, the launch of Love Tensta presented the area with pride, hopefulness and energy. A manifesto was laid out where a bold vision was presented for Tensta as well as for Sweden, claiming Tensta as the new Harlem/”nya söder” in terms of cultural capacity, and suggesting that the Foreign Ministry in Sweden move their department to the area to make use of the intercultural knowledge the area holds. It also posed questions in regards to the general idea of segregation (and who is segregated), pointing out that “the problem” lies as much in the segregated all-white areas with little connection to a growing multicultural Sweden. It was a call for new experts, an “all-encompassing approach” to issues of social concern, and a desire for a more inclusive “Swedishness” where everyone can be themselves regardless of what area you’re from or what your cultural background is.

The branding and website displayed a new and unexpected symbiosis of traditional Swedish and foreign influence that introduced to the public a visual vision of what an integrated Sweden could look like. The initiative drew much attention from the general public, and the website functioned for a year as a hub for the active participation of the Love Tensta network in public contexts (locally and across Stockholm) in regards to issues of segregation, “Swedishness” and the suburbs.

Love Tensta is no longer an active network. Visit the old site here. 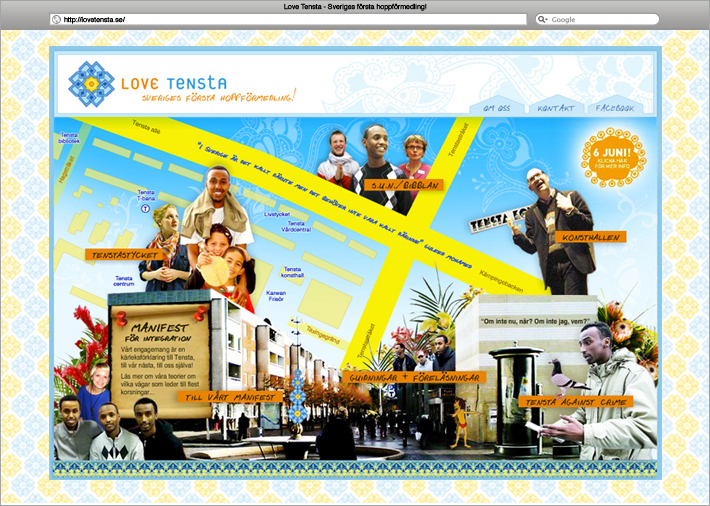 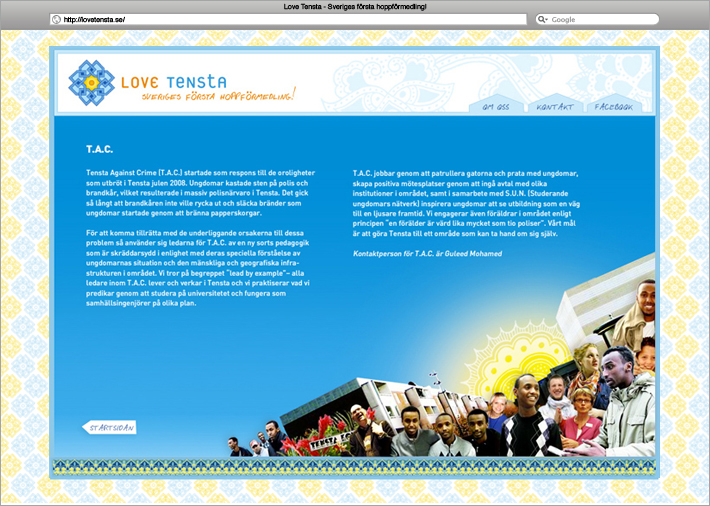 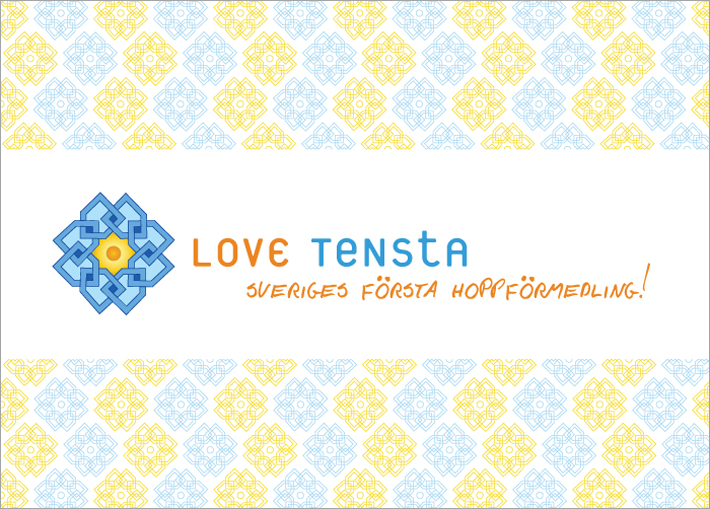 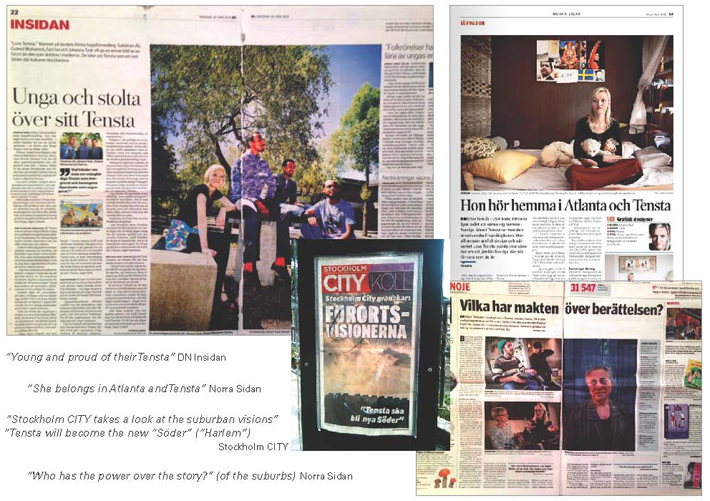 On June 6th 2010, Love Tensta invited the citizens of Tensta and the general public to a combined forum on integration and a celebration of the National Day at the local art center Tensta Konsthall.

During the event, we filled Tensta Konsthall with Swedish flags and gave out “Swedish souvenirs” to all visitors, as a way of playfully reclaiming the Swedish symbols, and discharge them of their stigma of exclusion (in the mind of both “new” and “old” Swedes). 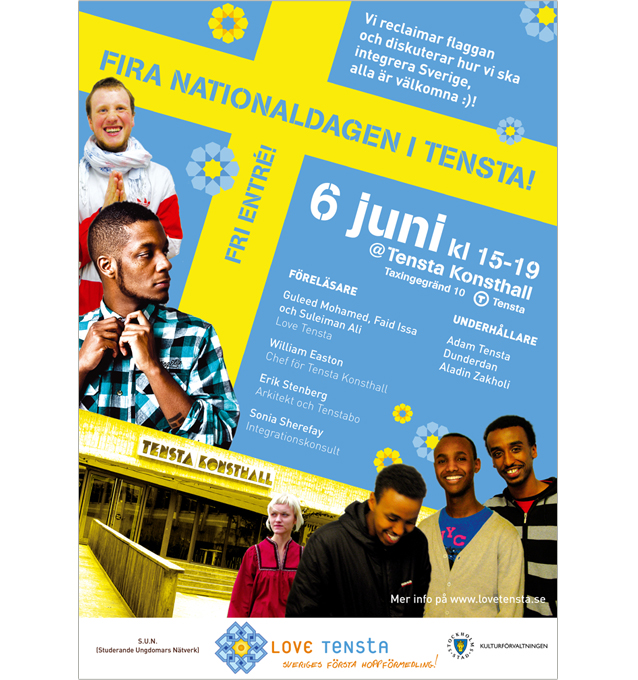 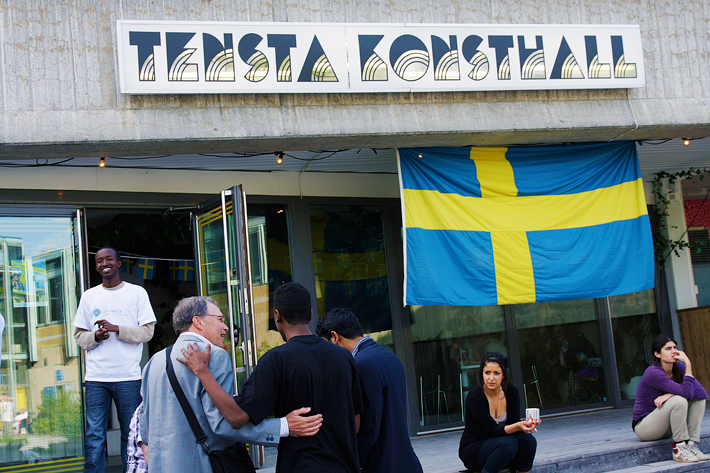 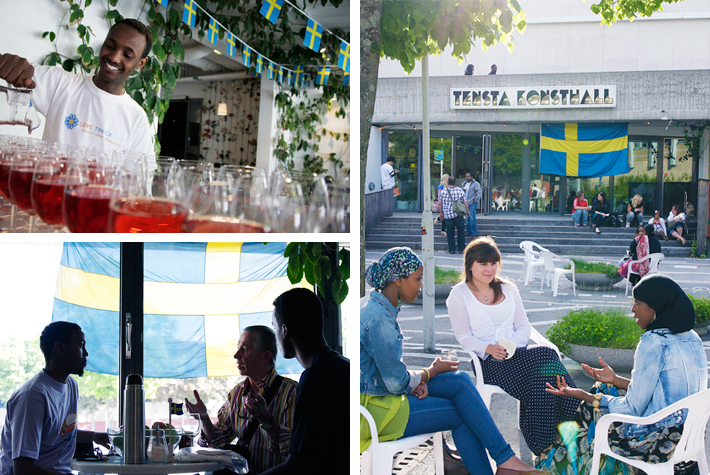 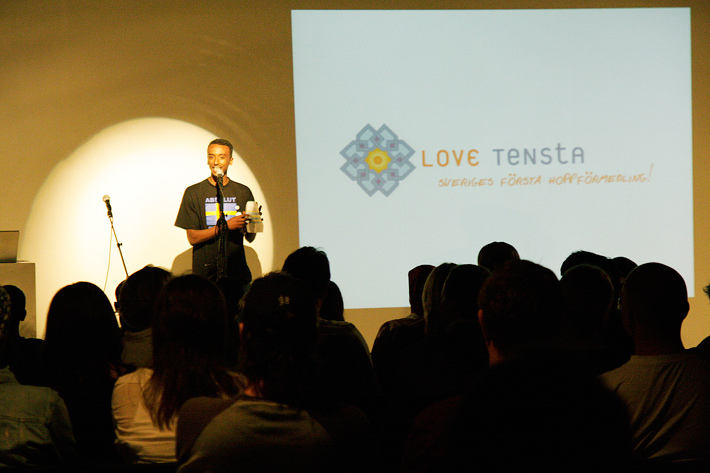 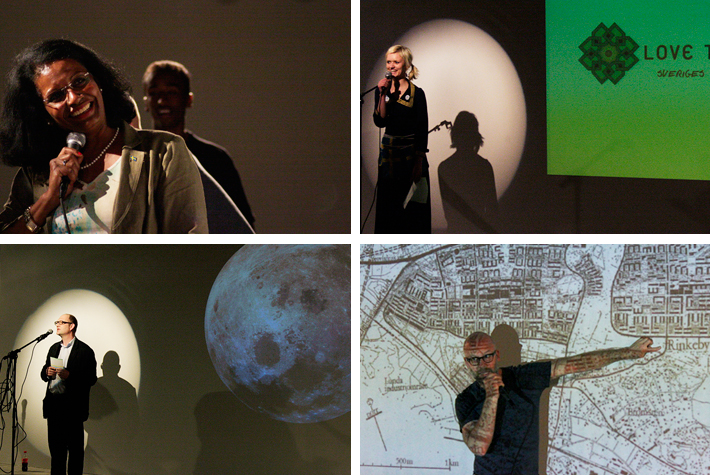 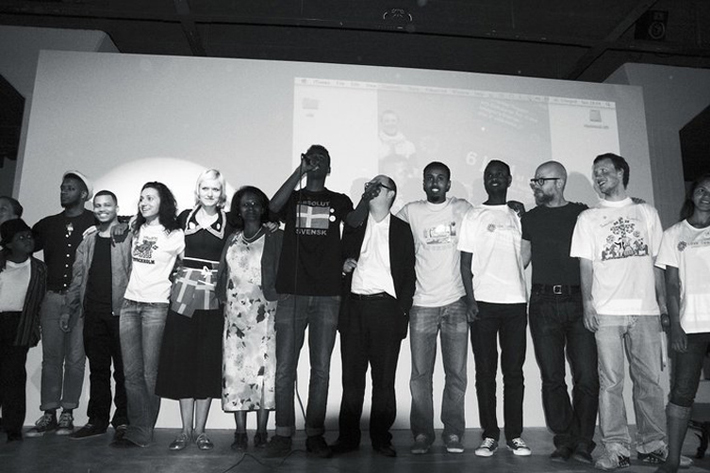 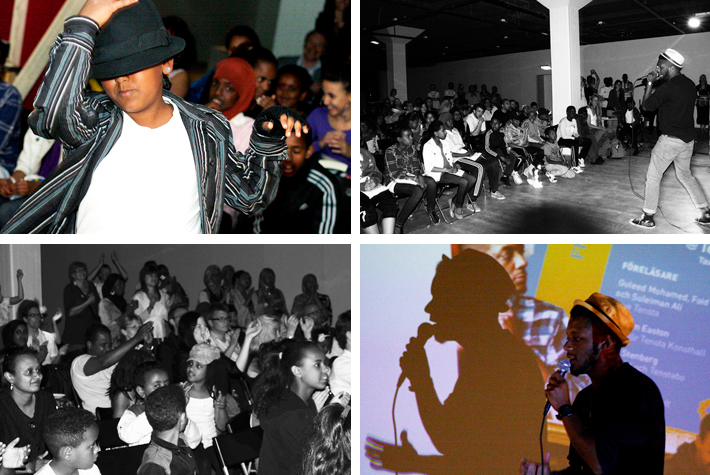 In the fall of 2010, Tensta Konsthall announced their search for a new Director. Love Tensta member Guleed Mohamed and myself decided to launch a Facebook campaign (including a campaign video) for Guleed running for the position of new Director, as a way of raising questions of who has the right to define and value art, and inspire new ideas of an art world that is connected to the every-day experience of regular people, and invites in perspectives that are missing today.

The campaign ran for a couple of months, and strategically used Guleed´s young age, 22 years old, background in the area, and lack of experience within the art sphere, to establish him kind of as“the kid in the emperor´s new clothes”, who by virtue of his “otherness” can point out things that those on the inside cannot see, or say things those on the inside cannot say. The campaign tip-toed the fine line between an actual application for a position, and an “art project” to explore the dynamics connected to these topics of concern.

The campaign received widespread coverage in national media, and was supported by a wide range of people, spanning well-established figures within art and culture, and “regular people” in Tensta and elsewhere. In retrospect, the attention received can be seen as both a sign of how weird the racial identities in the art world are, where the fact that a guy from Tensta would have anything to say about contemporary art, is so “crazy” that it draws attention from all directions. But also a sign of a desire, across borders, for art and culture to connect to a wider audience, a desire that in many ways marked the beginning of my own engagement in the sphere of art and artistic production. 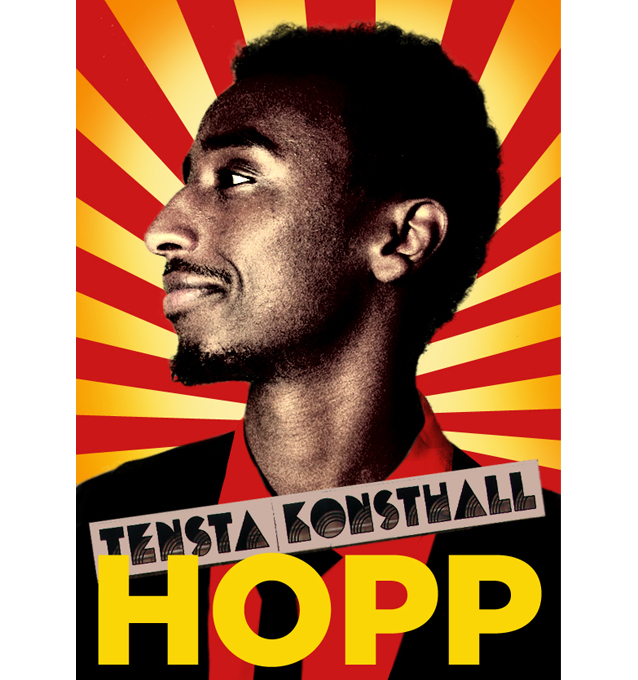 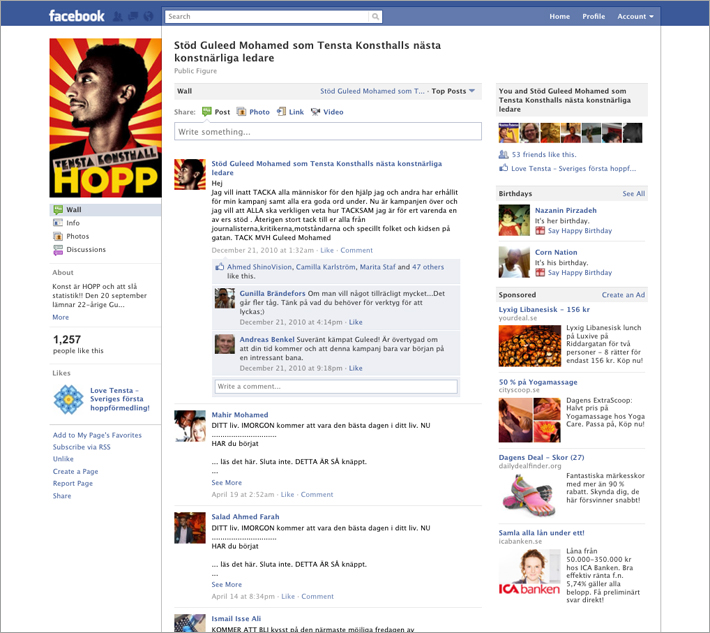 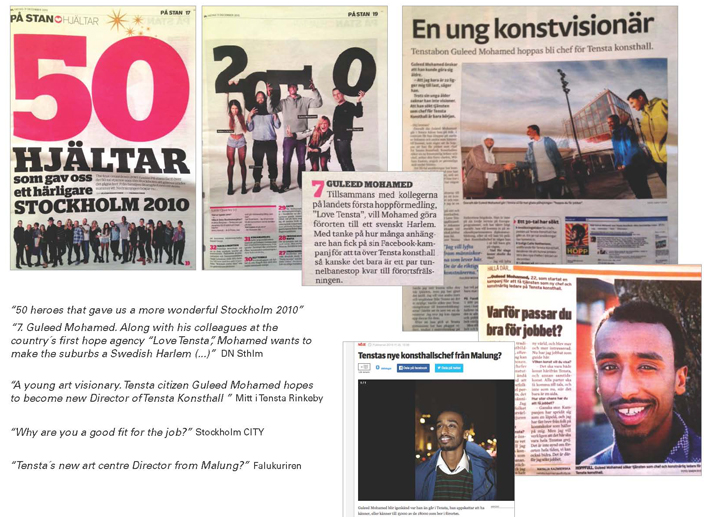 In the fall of 2010, I received Rebell’s Inner Peace prize for my work with Love Tensta. See the jury´s motivation and my thank you-speech below.