12 Feb 2018 Save the Children and Fwd Malmö: Social sustainability work in action

What might be fruitful principles and questions guiding the design of a transdisciplinary process involving a wide array of stakeholders addressing issues of poverty, violence and segregation affecting youth in Malmö? What are potential possibilities and challenges of linking change movements and points of analysis coming from a majority culture management perspective on the one hand and a marginalized activist perspective on the other?

In my previous blog post, Re-imagining the Swedish welfare state, I introduced the network “Sustainable Malmö”, initiated by non-profit Save the Children in Malmö. Over the Christmas break, I had the opportunity to get more in-depth knowledge of their work, strategies and process – internal within their own organization as well as external in relation to the other members of the network. 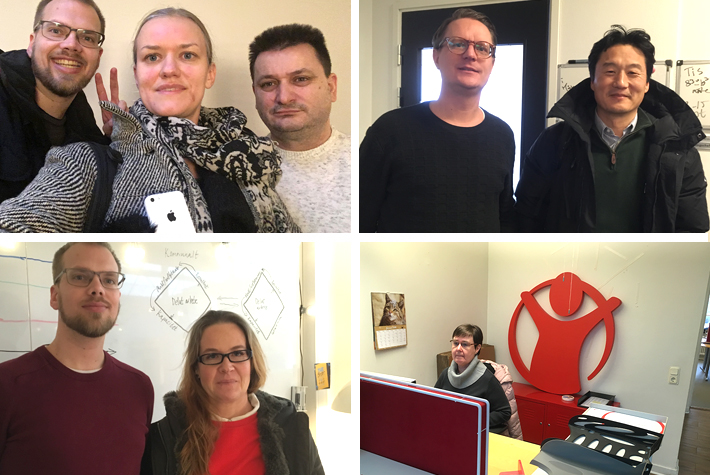 I will use this blog post to process my thoughts and share back some of my observations. In my analysis, I will draw from basic principles of my Intervention-Philosophy-in-the making, Conflictual Harmony. I will also share experiences and knowledge from parallel contexts in Stockholm, linking to a national as well as a global cultural landscape, some of it manifested in my performance research piece Love/Fuck Sweden. My desire to spark reflection and continued conversation, recognizing that select thoughts or interpretations may apply to the specific situation at hand at varying degrees.

So let’s start with what I find most interesting and inspiring with the approach that Save the Children is taking. Number one, their courage and persistence in terms of holding a space of uncertainty while co-creating a path forward. The key insight behind this approach – that the culture of “we got all the answers” is one of the major issues in any attempt at creating lasting change – I believe is absolutely fundamental to work attempting to break down barriers between different sectors, disciplines, social groups etc. Linked to this, is their approach to speak about strategic intentions rather than clear goals and visions, based on an understanding that making things too solid, set and clear from the start oftentimes prevents co-creation, discovery and innovation. Rather, inspired by Peter Senge’s theories, trying to stimulate a learning culture, held together by a shared desire to together invent the practices and thought models that will transition the welfare state into a welfare society, comprised of a multitude of actors taking a shared responsibility for the the well-being of the overall system.

I also resonate a lot with the problem analysis at the foundation of their work, illustrated in the graphic below. 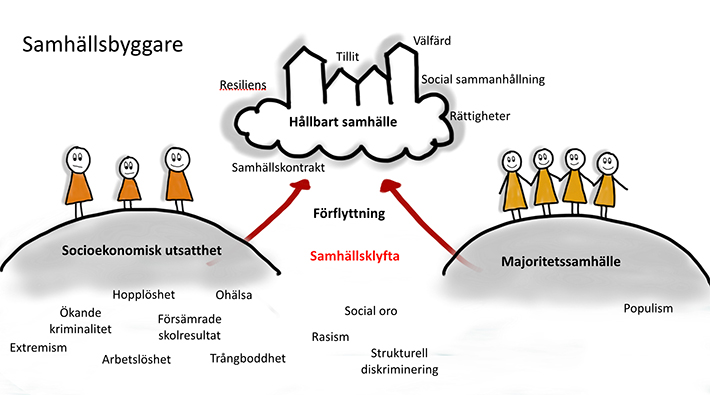 This analysis shows the growing socio-economic and cultural gap between the majority segment of the population and the growing population of people, mostly with non-European immigrant background, living in or near poverty, violence, lacking health, unemployment and extremism. In-between barriers of racism, structural discrimination and social tension, with symptoms of right-wing extremism and populism emerging in certain parts of the majority population. Contained in this analysis, is also the understanding that for the overall system to change, both sides need to move together towards a sustainable society. Meaning, the majority culture and practices are no more sustainable than the challenges facing the other side of the pond, and for real change to happen, we need to change mindsets, tools and practices connected to the current system.

The question from here, how one might design a transdisciplinary process, weaving the threads across the current gap together to create a shared path forward? The tactic within Save the Children as of now to start with change makers and innovative thinkers and doers within the majority sectors (tied to the public sector, academia, non-profits and for-profits), establishing common ground, infrastructures for exchange, shared projects and new ways of evaluating effects. Then along the way, create processes for inclusion of the target audience (on the other side of the current gap) in equal ways.

ACKNOWLEDGEMENT AND EXPLORATION OF THE WORLDS INVOLVED

So, what are some principles I believe could guide and help the design of such a process? Just like the work initiated by Save the Children, a process like this obviously cannot be a one two three step formula but needs to be developed organically, through careful attention to what each step forward produces in the system involved. I do believe there are some guidelines that could assist in the overall strategy of the work however, and will do my best to outline them below.

A main principle of Conflictual Harmony, is to best as you can adopt a “bird’s eye view” of the social systems and the world connected to them that are involved in the overall system you are trying to change. This to prevent the perspective of one side to govern the problem analysis and proposed solutions, rather have these “worlds” meet on equal terms, to get a fuller picture of the overall problem, but also to use this meeting to stimulate true innovation.

Identifying what these worlds may be in a complex landscape requires some synthesizing abilities, in the creation of a “bigger picture” or a systems map that is always a simplification of the real world. I do believe it is necessary to create these kind of models however, just like the graphic above which simplifies the overall current social gap as one between the majority population and those living in socio economic vulnerability. If we were to decide to map the “worlds” connected to these two sides, questions to consider would be: What are the problem analyses on each side? Within the diversity of perspectives contained in each “bubble”, what are overlapping themes? Interpretations and meanings?

Designing this kind of a process would of course differ depending on the situation at hand, and might involve ethnographic explorations and interviews, performance work similar to the ones I have conducted previously (see Love/Fuck Sweden and Designing for end of life care) as well as understanding theoretical underpinnings of each world. For the sake of this analysis, I will draw from my own experiences of these two “worlds”, as connected to a larger national and global web of meaning making and culture, and outline a few characteristics that may appear in a mapping of this kind.

As far as the majority culture side, and specifically the change makers and innovators within the organizational cultures tied to different sectors, I see a lot of parallels to global change movements connected to new modes of management. These movements identify the demand-and-control-culture of traditional management techniques as inadequate in responding to the complex challenges of our times, and emphasize a re-thinking of hierarchies, silos and simple cause and effect solutions towards increased collaboration, network cultures and shared sense making. Many of these movements also point to the importance of experimentation, embracing risk and failure, and establishing room for vulnerability and  the non-rational aspects of organizational life. Design thinking as implemented in the management world can be seen as part of this trend towards increased creativity and resilience. I also see it advocated by academic movements tied to majority culture arts contexts, who lift the importance of the unknown, the particular, the embodied, practice and making.

When we explore these worlds and the change movements within, it’s always in the search of a more complete picture of the overall problem. The issues identified by the analyses above, are indeed an important slice of the pie. They are also things that are oftentimes hard to see from an activist social justice perspective who, on the other hand, can contribute with important insights connected to the overall problem from their angle.

If we move to this side next, and take a look at “the world” of  the change movements directly connected to socio economically vulnerable communities. Drawing from my own experience within these circles, much of the theory here is connected to post colonial analyses, speaking of power dynamics, and structures of privilege along lines of race and ethnic heritage. Much focus is on the particular bodies and perspectives inhabiting or being excluded from certain positions and spheres of influence, revealing culturally ingrained stereotypes of “non-whites” as culturally inferior, dangerous, uncivilized etc.

Based on my own activist experience from this side of things, the projections on these areas and the people that inhabit them by the majority culture are quite strong. In simple terms, it’s projections of people as victims (with the majority culture responding identity of “the helper”), aggressors (majority flip side: “the protector”), and sometimes, heroes (majority flip side: “the self-deprecating person aware of their privilege”). Over the years, I have observed how these identities and power relations are upheld, through body language, tone of voice, media narratives, language, problem formulations. Seen recurring patterns of actors seeking participation and inclusion, not realizing that the frameworks and problem definitions are already set, and that these might look different from a perspective different than your own. Also not being open to participation on people’s own terms, rather seeking grateful victims willing to accept a kind of participation where they are still kept in their place. This includes the common behavior of expecting the participatory process to be jolly and nice the whole way, shying away from conflict and challenge around one’s own power position. I’ve heard people confronted with “unexpected confrontation” describe it as “bad energy”, sometimes withdrawing their resources when a bump appears in the road. On the side of these communities, I’ve seen this dynamic anger people, confuse them, disempower them, sometimes leading to withdrawal from much contact with majority culture overall.

ESTABLISHING ACTORS FROM EACH SIDE, EXPLORING IDENTITIES & BUILDING CAPACITY AND PRINCIPLES FOR TRUE MEETING

So, what kind of a process design might make a meeting between these two worlds fruitful and creative? One prerequisite, I would say, is establishing an openness on both sides to the meeting, something that may need to happen on separate sides at first. (…)

0 comments on “Save the Children and Fwd Malmö: Social sustainability work in action”