14 Dec 2016 A non manifesto turned into a manifesto

Along with a few of my fellow Trans designers, I attended artist Sheryl Oring´s manifesto writing workshop at MOMA. The workshop was based on her project “I wish to say”, where she travels the country with a bunch of type writers to allow the US public to express themselves to their public officials.

My manifesto ended up very brief and to the point. 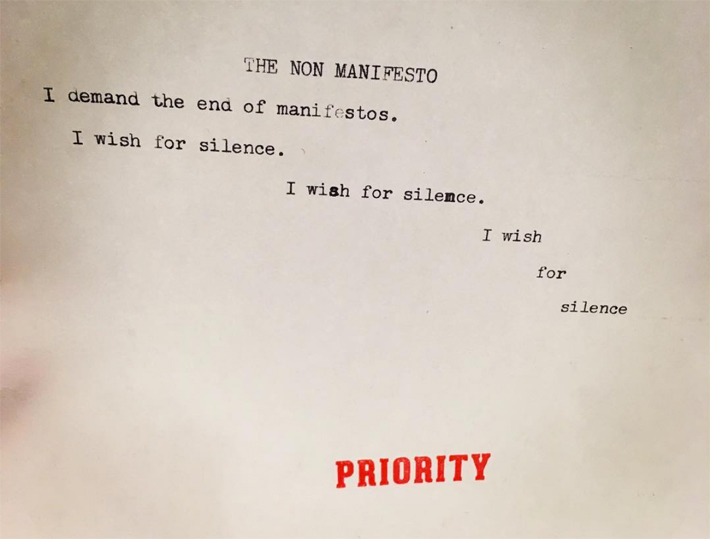 As part of my class work for “Design for the Century”, I was given the assignment to develop a design manifesto based on our readings of the semester, centered around design and technology in relation to various systems across individual, collective and global scales. I took this opportunity to expand my non manifesto. Read the entire piece below:

THE EMERGENCE OF TRANSDISCIPLINARY DESIGN:
a non manifesto turned into a manifesto

I DEMAND THE END OF DESIGN MANIFESTOS

I demand the end of bold statements, grand visions, superficiality in response to that which can only be felt, touched, responded to.

I demand space for confusion, for self-expression, for carefully patiently listening to what each moment, each new piece of information, each new thought and sensation, is trying to tell you.

I demand space for alienation, space to linger in strangeness.

Could alienation be seen as a birth place of individual and collective transformation?

Could the existential landscapes connected to the state of alienation be described as continuously changing, with an inherent threat of annihilation, involving unchartered territory with a large amount of unknowns and unpredictability involved? (1)

Could alienation be described as unjust in relation to the human beings they alienate, frightening even? Are they also growth places for transformative ways of practicing the art of being human? (1)

Can states of alienation function as a starting point for exploring that which was previously unimaginable, allowing us to build from a vantage point that is multiple? Could the “state of alienation” be used as a creative force, in the mirror of which humanity in its fullness can more clearly see itself and choose more wisely who we want to be? (1)

In this silence, sensing the self as part of an interconnected web of relations, to other human beings, social systems, to technology and conceptual ideas of what is.

Do we live in a digital Panopticon, monitoring ourselves as well as those around us through an internalized surveillance system? Is the real power in this system the machinery and our submission to it, rather than the specific individual/s with access to all this knowledge too vast and too complex to easily make any sense out of? (2)

What does it take to regain power? How do we enjoy the benefits of the digital world laid out before us, as an individual, a community or a nation, without becoming puppets of a machinery designed to make us fully transparent creatures, devoid of any privacy? (2)

Can the practice of looking – carefully looking at the meanings and pulls of conceptual and digital communications – help us mentally step out of the all-seeing gaze hovering over us, and the power they possess, by looking at that which we perceive might be looking at us? (2)

Can it help us disidentify from the images we present of ourselves in digital channels, or the images we perceive of others, as merely that, images, and not who we are? (2)

Can it help us treasure that within us that cannot be seen, read, performed or known to the rational mind, that private space that no human or technological gaze can ever reach beyond the intimacy of true connection to another human being? (2)

Could my wish for silence also be described as a postmodernist urge to transcend beyond the persistent dualisms in Western traditions, such as the distinction between body/mind, nature/human, man/woman, private/public, self/other, God/man, civilized/primitive, right/wrong, victim/perpetrator, winner/loser? (3)

Is it true that these dualisms have created a culture of competitive play (where one part is bound to lose), and domination? That the “losing end” in this game of domination is broadly put women, people of color, nature, workers, animals, and all those not conforming to the dualisms inherent in for instance the identities of male and female? (3)

Is my desire for a space where these distinctions do not define us? Where we can collage ourselves together again and again according to our own will, where a hegemony of thought or ideology does not exist, and play is free and open-ended? (3)

Can technological intervention and technological metaphor be used as destabilizing tools in this quest? Can they define a movement not in opposition to technological advancement (and the white capitalist patriarchal culture that has come to define it), but parallel to it, utilizing its tools but changing their purpose? (3)

Do I even care about technology?

Perhaps I can find value in this discussion by acknowledging the maturity in this approach as a way of “working with the materials of the situation” to use a common design-term? Appreciate the approach to treat an “undesirable situation” from a systemic standpoint, where an oppositional movement is not merely defined by its innocence and otherness in relation to the “oppressive power”, but admits to its own inherent part in the structures at play and seeks to actively rewrite the “script of the game”? (3)

Am I happy with this analysis?

Do I sense that the focus on technology displays an escapism and a denial of the material contexts that are an inevitable part of our existence? (3)

Do I feel this escapism and denial also in my own body, my own intellect, my own Being, or lack thereof?

Is my wish for silence rooted in this?

Could it be so?

What could point me towards an embrace of BOTH our material realities of being bound by body, social context, mental conditioning etc, AND our possibility to connect to an all-encompassing space that is fluid, undefined and free of constraining identities?

Is it true that you see our material conditions and collective identities (and the dualism that comes with them) as an inevitable part of our earthly existence, am I right to make this assumptions? Am I correct to see in your work a unity that is ever available in this play of shifting form, a dynamic ever-changing unity, available to us through connecting with that part of ourselves that can both be described as a heightened sense of Self and a transcendence of Self? (3)

Chantal Mouffe, are you the one to help me ground these thoughts in social, political, material reality? Am I correct to read into your political theories an acceptance of the human tendency to form collective identities, as well as the inherent power conflicts that this comes with? Am I correct to see your democratic model as an attempt to create spaces where such conflict can be channeled in constructive ways, by working with the tension rather than avoiding it or trying to “overcome” it? (3)

Can we, referencing the famous vase/two faces as an example,  see and work with BOTH reality as vase, AND reality as two faces? Or in other words, reality as caught in dualism – you escape one form of dualism and another emerges – AND reality as transcending all these things? (3)

Is this still a non manifesto? Do I still wish for silence?

Or did I just transcend the nature of my non manifesto by turning it into a manifesto that embraces… Language? Language as what?

Are we correct to question the solidity of words and language? Is there always underlying ideologies and power structures inherent in all attempts at making the world legible through language? Is it true that no word, however tied to institutions, laws, physical objects or collective agreements, carries any independent meaning or existence beyond the meaning we give them? Are they fleeting, merely sign posts of an existing order, that is changeable at any given point in time? (4)

What creates this sense of separateness from what could be labelled “the parts” (the words or the language and the concepts we have connected to them) from “the whole” (that which exists “in itself”, beyond our descriptions of it)? (4)

Is it perhaps Design that is demanding this next step, inviting in brain scientist Jill Bolte Taylor to the conversation to wrap up this mess and put an end to the confusion?

In her book “My stroke of insight”, Jill describes watching her left brain functionality of language, linearity and labeling the world slowly diminishing during a stroke. (4)

Is it Design that now demanded the end of sentences ending in question marks?

What came to dominate this experience in place of the left brain’s habit of sense-making, identity-building and conceptualizing, was the right brain’s all-encompassing being, connectedness and fleeting sense of form, qualities connected to a strong sense of peace and unity. (4)

As the book progresses, Jill describes her journey to regain her left brain qualities – all necessary for communication and navigation in a space shared with other human beings and our material existence – yet describes her commitment to maintaining “the lens” of unity and connectivity in the face of the insistence of her left brain to “return” to a culturally conditioned space of language as truth. It’s a fascinating account, that points to the possibility of language as a tool, something to reevaluate and scrutinize, to bring down from its pedestal and brought into the poetic existence that is life. (4)

Is this what we are doing? Is this what Design just did? Brought language down from its pedestal, allowing an explorative, open-ended process starting in alienation and confusion, to end in a graspable model, recognized as a model and not the truth, opening up for directed action towards preferred states of left and right brain conflictual harmony?

So what does this all mean? Who are you Design?

I am that which brings order in chaos.

I am that which allows space for mess, who sees the underlying patterns, who is not afraid to look mess, uncertainty, conflict, alienation in the eye.

I am the One to use this mess, as opportunities for growth, for transformation, for clarity that will again dissolve into mess.

I am the One to balance our material existence with the all-encompassing spirit, not to dissolve dualism but to use it as a tool to work with it, dance with it, play with it and create with it.

I am the left brain and the right brain, the tipping point of creation, the birth place of that which is yet to be imagined and lovingly brought into being.

I am silence speaking, quietly and boldly, through actions, through material, through connections, platforms and facilitation.

I am Transdisciplinary Design.

(1) Thoughts expressed in response to the reading of “The-mastery-of-non-mastery”, “Xenofem Manifesto” and “Bratton Outing Turing Test”.

(2)  Thoughts expressed in response to the readings “Practices of Looking, Introduction to Visual Culture” and “The Eye of Power”.

(4) Thoughts expressed in response to the readings “Dictionary of the possible”, “Zero Knot” and “Plot”.

0 comments on “A non manifesto turned into a manifesto”